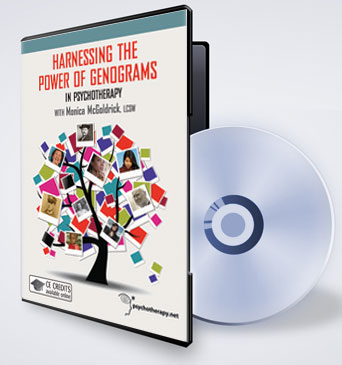 Harnessing the Power of Genograms (DVD)

By watching this video, you will learn how to:

This is a rare opportunity to watch the therapist who developed and popularized genograms demonstrate how to actually create and utilize them in a therapy session. In this video, you will see Monica McGoldrick in action as she masterfully conducts an initial interview with a new client, demonstrating the step-by-step process of gathering historical information, creating the genogram, and contextualizing the client’s presenting problem within a multigenerational family systems framework.

Order this video directly from psychotherapy.net (stream it for $49 or order the DVD for $59).

John is a 39-year-old African-American graphic designer who is having marital problems. Mystified and distressed by his pattern of distancing from his wife who is six months pregnant, he desperately wants to understand why he is pulling away. McGoldrick’s focused interest in John’s family story gently guides him in a thorough investigation of the social and historical context of his current struggles. With McGoldrick as an ally, John makes fascinating discoveries as he uncovers surprising coincidences, poignant tragedies and inspiring sources of resilience.

Watching McGoldrick engage a client in exploring the connection between his presenting problem and his family-of-origin issues is a treat in and of itself, but a bonus feature of this video is following McGoldrick’s step-by-step creation of John’s genogram on the spot. It makes for a compelling and highly educational experience.

There are no reviews yet.