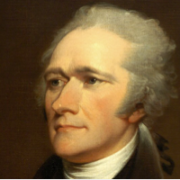 Alexander Hamilton, luckily not soon to be removed from the $10 bill, has been thought of by many scholars as perhaps the most brilliant and important contributors to our country’s form of government. But in the popular mind he was almost forgotten for the past 200 years, at least until Lin Manuel Miranda’s spectacular hip-hop Broadway hit brought him back to life. Hamilton was villified by both Thomas Jefferson and John Adams among our founding heroes and accused by many in the early press as a foreigner, a bastard, and mulatto.

‘Only very recently through Lin Manuel Miranda’s brilliant interpretation of Hamilton and his times is our appreciation of this major founding father being transformed.